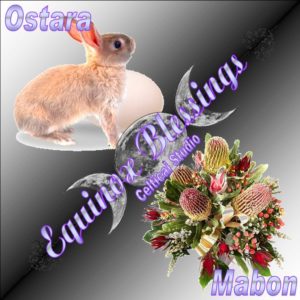 On March 21st, the Autumn Equinox occurs – when day and night are equal in length.  Known as Mabon (pronounced MAH-bon), it is when the God is within his Sage stage and approaches the end of his life.  He is preparing to leave his physical body and journey into the underworld.  During Samhain, he will rest until he is reborn as The Sun God at Yule.

During Mabon, the Goddess is in her Crone aspect as she prepares herself for her lover’s eventual demise.  Although saddened, she knows he lives on inside her.

Mabon is named after the Welsh God Mabon ap Modron – stolen three days after his birth and imprisoned.  He was rescued by King Arthur and became one of his companions.  His story symbolises hope, faith and loyalty.

Mabon represents the battle between day and night.  At the equinoxes, Lleu Llaw Gyffes (son of Arianrhod and the God of Light) and Gronw Pebr (God of Night) battle for supremacy.  At Mabon, Lleu is betrayed by his wife, Blodeuwedd.  Lleu is defeated and the days begin to become shorter.  This battle symbolises the cycle of rebirth.

Nature starts to enter its dormant phase, conserving energies as the days grow shorter.  It is the last of the harvests.  Mabon is also known as The Wine Harvest, Apple Harvest, Harvest Home, Witch’s Thanksgiving and Cornucopia.

We seek your blessing as Mabon draws nigh

Giving our thanks for all you provide

We harvest our hopes, leave behind our fear

And listen closely, winter announces she is near.

Help us find our balance at core

Transform our light to flow and soar

Bless our homes, our friends, our hearth

The Historical Traditions of Mabon

The Second Harvest and the Autumn Equinox were celebrated by honouring the wise aspects of the Gods and Goddesses.  Celebrations provided welcome relief from the hard labour of harvesting.  It was considered to be an ideal time for finishing old business, exploring The Mysteries and focussing on equality.

Animals began their migration patterns while farmers and villagers readied their stocks for winter.  Produce was carefully preserved, wines were made, seeds and seed pods were stored for the coming months.  Magickal Herbs were picked and dried.  Houses were fixed and wood put aside.  All in preparation for the cold months approaching.

Offerings were made to harvested fields in recognition of its abundance.  It was believed Grain Spirits lived within the last sheaf of the harvest.  These were often dressed and decorated to resemble a man and then burned as a celebration of the sun’s gradual return.

Graves were honoured with offerings of seeds and seed pods.  This may have been especially prudent when heavy snowfall may have prevented people from visiting these sites during Samhain.

The Modern Traditions of Mabon

As a celebration of Crone energy, it is a very important time for considering your own spiritual growth.  Nurture and enrich yourself as a spiritual being of Wicca and as a child of The Goddess.

Walking through the forest, visiting cemeteries and collecting seed pods are worthwhile activities in modern times.  Picking pumpkins, harvest crafts and selecting a Harvest Queen and King are also popular across some Wiccan traditions.

As a time of community, you will notice Pagan Pride and International Women’s Days are often held in the month of March.  These help draw together like-minded people by acknowledging the connection between different people.

Although many of us no longer harvest our own fields, bounty can still be celebrated.  Food drives or contributing to a local charity reflect abundance.  Why not share your own abundance?

The crafting of God’s Eyes is sometimes associated with Mabon. (Remember those popsicles sticks with wool wound around them?)  Also known as an “Ojo de Dios”, the ancient symbol was originally made by the Huichol Indians of Mexico and the Aymara Indians of Bolivia.  It is believed to represent the dying Sun God and how he is always watching over us even if the sunlight hours grow shorter.  Spaniards took the tradition back to the European countries.

It is an ideal time to honour your shadow self by respecting and working through your emotions of sorrow, anger, mistrust and repressed feelings.  Expand your practical culinary skills by trying your hand at making pickles, chutneys or jams.

Here in Australia, The season of Mabon brings cool mornings and warm, still days.  By some Aboriginal groups, it is called The Eel Season as they are fat and ready to harvest as they head out to sea for breeding.  The birds begin their migration patterns, the possums and dingos begin their breeding seasons. The skinks and tortoises begin their hibernation.  Red-tailed Black Cockatoos begin to chip away inside dead trees to create their nesting spaces.

The Manna or White or Ribbon Gum begins its flowering season.  You know these Eucalypts with their blazing white bark. At the base of their trunk, the bark seems to fall away in ribbons – hanging like the petals of a flower and the branches shooting straight into the air like a 40 metre tall stamen.

If the weather conditions are right, rainfall is a high possibility.  Autumn is known as the season of Fall – where the leaves fall from the trees. Here in South-East Queensland, very few trees lose their leaves.  The Black Bean or Moreton Bay Chestnut begins flowering (these beans are highly toxic causing diaorrhea and vomiting).  Velvet Leaf or Callicarpa bushes will slowly turn their inconspicuous, small, green berries a stunning, bright purple.  Brush Cherry trees are growing their edible pink and red fruits.

In gardens, the Banksia Bushes are flowering, as are the Easter May (a non-native tree).  The mulberry and gooseberry bushes are fruiting and will be ready to harvest in the coming weeks.

This is a season for getting out into the garden. The sun is not as hot and there is still some daylight in the early evening to weed, prune and sing to your plants.  It is a time to prepare some of the vegetable beds for their fallow time and prepare to plant the Winter Seeds.  It is also a time of nurturing the land of your home.

Of course, many will be celebrating the Christian celebration of Easter.  You may choose to follow both the energy of mass consciousness alongside your Mabon celebrations.  Do what feels right for you and your intention for being in connection with the cycle of time.  Easter can become just a fun time of sharing chocolate while Ostara can be something more profound.

As a season of rainfall, you may wish to work with water goddesses, the colours of the Manna Gum (silvery white, blue and pink) or the medicine of the Eel and the Possum.

Mabon provides an opportunity to:

] Initiate a food drive or assist a charity with theirs

] Pick apples in an orchard

] Turn off the TV and tell stories!

] Complete an Autumn Clean in preparation for Winter

] Make a scarecrow for your garden

Listen to the broadcast on Reflect Radio

There are no upcoming events at this time.

What’s in the eStore?

For purchases, please contact the Studio as the site is under construction. Bright blessings. Dismiss