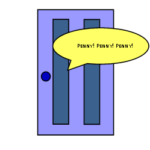 If you are a fan of The Big Bang Theory (the TV show), you’ll recognise Sheldon’s signature ‘door knock’ process. Recently, I was given the challenge to write a spiritual article on Quantum Physics in layman’s terms. In this article, I’ll share how Quantum Physics has provided documentation and proof for the modern Light Worker. Let this article sit with your energy and feel whether it falls into Quantum Psychic truth for you!
By George, I think they’ve got it!
Quantum Physicists (referred to as QPs from here on) actually do sit around attempting to explain how, why, what and when reality is made real. This explanation is called Quantum Mechanics. 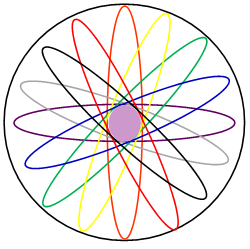 Next time you manifest something in your life or do a hands-on-healing, thank Einstein, Young and Bohr (leading QPs) who helped Science explain the teachings of philosophers, mystics and spiritual leaders since the beginning of time.
These modern QPs proved through experimentation that everything – and I mean everything – is actually made up of energy/light. Everything! This throws a spanner into the science (known as Newtonian physics) taught currently in most education systems. Newtonian Physics says everything is made up of atoms and molecules attracted by gravity. Quantum Physics dug deeper to discover the pure energy as the foundation for everything.

Albert Einstein: Science without religion is lame, religion without science is blind.

If everything is made of light, the term ‘light-worker’ begins to make sense as energetic terminology. From the viewpoint of Quantum Physics, a light-worker is actually a Quantum Mechanic! A Mechanic becomes an Observer of the whole – making adjustments where necessary, tweaking this cog or that sparkplug, going for test-drives to explore performance. Instinctually, your energetic vibration and desire to be at ONE with the Cosmic Energy has heightened your own working with Quantum Physics.
Maybe we should all change our business cards to Quantum Psychic Mechanics!

Catching the Wave
In 1927, QPs conducted experiments to understand what the pure energy of the Universe looked like. Their results are now known as the Copenhagen Interpretation. They discovered cosmic energy (making up everything in the Universe) is a wave of infinite probabilities – everything that was, is and could be i.e. past, present and future. This wave exists all at once. When attention is given to the wave, all other probabilities, possibilities and opportunities collapse as a ‘particle’ or matter is formed.
What does this mean for us as beings trying to create our reality?
Following the rise in such spiritual teachings as Access Consciousness™ and Afformation™, you can understand WHY these teachers focus on forming questions for creating reality rather than coming up with answers. For example, “What else is possible here?”, opens up the Cosmic Wave for you to find the perfect place to ‘hang ten’ rather than dumping you in the surf by projecting an answer onto the wave already. Does that make sense?
By taking your attention away from the answer (or as some say a negative thought, behaviour or creation of reality), you are able to open up the infinite number of possibilities available in the wave.

Barbara Brennan (Physicist) ~ “Matter does not exist with certainty in definite places, but rather, shows ‘tendencies’ to exist. Quantum physics is beginning to realise that the Universe to be a dynamic web of interconnected and inseparable energy patterns. If the universe is indeed composed of such a web, there is logically no such thing as a part.”

You often hear New Age Spiritual Buffs talking about Mass Consciousness and seeking Truth. Barbara’s quote leads us to understand “We are ONE” as being proven on an energetic level by QPs! How cool is that?!
Energy has weight. You can feel an emotion – when you are saddened, angry or fearful, you can actually feel the heaviness or weight of that energy on your physical body. The same when you are feeling contented, blissful or joyful. It feels light within your body.
Taking the concept of One-ness further, it is important to understand your own feelings may not be yours. They may belong to someone else (or a whole heap of someone elses) – as a part of the Cosmic Web, the inter-connectedness creates immediate ripples across your energetic vibration.
Removing the weight from your own physical, emotional and spiritual body is as simple as looking elsewhere, taking away attention. Let’s explore that a little further…

With eyes to see
I love this Quantum Physics stuff! It helps us understand the purpose of affirmations and questions.
We’ve learnt that by looking at (or giving attention) to a certain thought, emotion, behaviour, reality, we give it substance i.e. particles. These particles then form atoms and molecules and “Hey Presto” we have created the next part of what we ‘see’ in our lives.
It is very important for us to change our thinking from expectations to anticipating possibilities. By doing so, you open yourself to the truth of energy, matter and the formation of reality.
I picture it as looking at a 3D image where your ability to see ‘through’ the image actually creates the image. In effect, you look through all the available images until you find one that feels light and then create it! Unfortunately, many look for an image and when they find one that brings up fear, they tend to fixate and therefore bring to them, the actual fixation.
Back to the Future
Let’s take the BELIEF + THOUGHT = REALITY a little bit further.
As Barbara Brennan stated in the quote above, there are no parts – there is only a WHOLE. Therefore, every creation of reality through belief + thought is instantaneous! Subatomic particles receive and send communication to each other immediately. This means time and space do not exist within the whole.
Rather, you are a little like Dr Who – you exist on multiple levels at multiple times in one big MULTI-verse. Phew! A little

difficult to comprehend, right? Past, present and future all co-exist until you start to focus attention on the cosmic wave, possibilities fall away and you create your reality.
Someone who is a reader, healer, lightworker or Psychic Mechanic is able, whether they realise it or not, to observe the wave of Cosmic Energy and interpret the possibilities for those who are forgetting they are able to ‘see’.

Max Planck ~ Science cannot solve the ultimate mystery of nature. And that is because, in the last analysis, we ourselves are a part of the mystery that we are trying to solve.”

Bet you didn’t realise just how powerful you are as a human being! It’s time to suit up as a Quantum Psychic Mechanic and be an Observer of all the possibilities, working your thoughts and beliefs to create the reality you deserve!
If all my ramblings only leave you with one thought, I hope it is this: You are a Creator of your Reality. It’s proven by QPs! I look forward to new discoveries by the Quantum Physicists – let’s prove metaphysical (spiritual) thought isn’t just a bunch of Hogwarts… err.. I mean Hogwash!
Namaste
Caithe Cameron (Celticai Studio) is an Australian Quantum Psychic Mechanic 
This blogpost is the copyright of the Author. All rights reserved by Caithe Cameron, 2012. This article may only be reproduced and disseminated with express written permission of the author.
Bibliography
Access Administrator (2011) Is It Time To Give Up Our Addiction to Emotion?
http://access-consciousness-blog.com/2011/02/is-it-time-to-give-up-our-addiction-to-emotion/
Danes, Chuck (2005-2012) Quantum Physics. http://www.abundance-and-happiness.com/quantum-physics.html
Goswami, Amit (2012) Centre for Quantum Activism. http://www.amitgoswami.org/
Paterson, Alex (1999) Quantum Physics. http://www.vision.net.au/~apaterson/science/physics_quantum.htm
Thompson, Ian (2002) Are Quantum Physics and Spirituality related? http://www.theisticscience.org/talks/qps1/